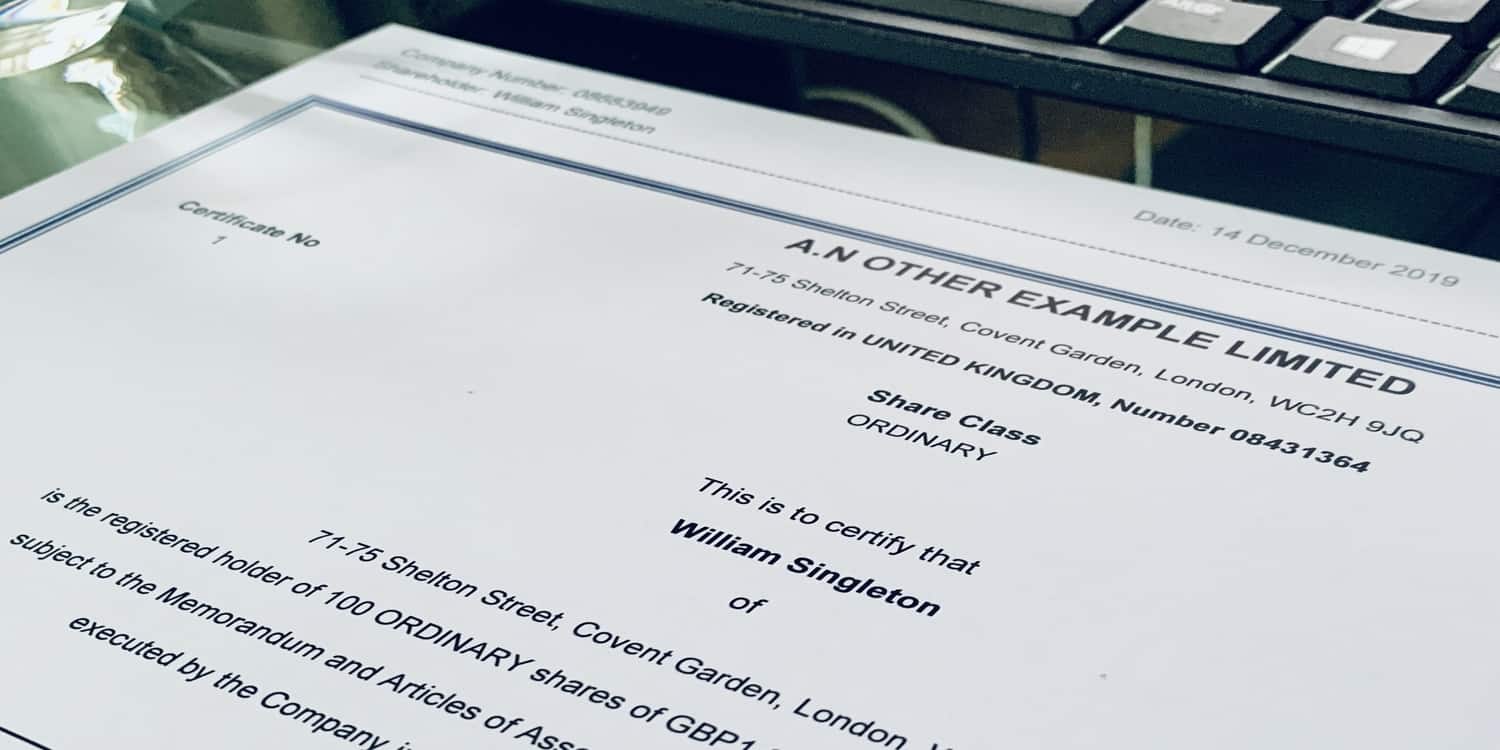 A share certificate is a document that a limited by shares company creates and distributed to its shareholders, the purpose of which is to prove ownership of shares in the company. Essentially, it is receipt of ownership, typically in the form of a single piece of paper or digital document.

A share certificate provides independent evidence of title to shares, as per s. 768 Companies Act 2006. It enables its holder, known as a shareholder, to sell or transfer the share(s) to a new owner.

A share certificate should generally be issued within two months of the share(s) being allotted, i.e., no later than two months after the shares have been purchased or transferred.

According to section 24(1) of the model articles for private companies limited by shares ‘a company must issue each shareholder, free of charge, with one or more share certificates in respect of the shares which that shareholder holds.’

It may be necessary to change the share capital of a limited company by:

For more information about changing the share capital of a limited company see our separate blog Share capital – how you can change it.

If a shareholder changes their name through marriage or deed poll, they may request a replacement share certificate which reflects their new name. We will consider this further below.

The Companies Act 2006 prescribes that a company must issue a share certificate when any shares are allotted (issued).

It is common practice to issue share certificates to the subscribers (original shareholders) who set up the business and become members during the company formation process; however, there is no legal requirement to do so. This is because their details are recorded in the statement of capital and the memorandum of association.

What details must be included on a share certificate?

Number and class of shares issued

The number of company shares which are owned by the bearer of the share certificate and defines the class of shares. Examples of class of shares include ordinary shares, non-voting shares, preference shares, deferred shares, etc.

The nominal value of shares issued

The nominal value of shares is the minimum price at which they can be issued, for example 1p or £1, etc. Shares can never be allotted for less than this nominal value..

Share certificates must (a) have affixed to them the company’s common seal, or (b) be otherwise executed in accordance with the Companies Acts

Traditionally companies had their own unique corporate seals, which originally used melted wax.

Some companies still use modern versions of seals to execute official company documents. But under section 44(2) of the Companies Act 2006, an alternative to a seal for validly executing documents is a signature on behalf of the company ‘by two authorised signatories, or … by a director of the company in the presence of a witness who attests the signature.’

So it is no longer necessary to affix a company seal to a share certificate.

Can a single share certificate be issued in respect of shares of more than one class?

According to section 24 of the model articles ‘no certificate may be issued in respect of shares of more than one class.’

If the shareholder owns more than one class of shares, a separate share certificate must be issued in respect of each different class.

Section 24 of the model articles states ‘if more than one person holds a share, only one certificate may be issued in respect of it.’

In the case of joint shareholders, all names can be included on one share certificate, with the address of the first named shareholder.

Banks and lenders may ask to see these certificates when you open a business bank account or apply for a loan. For this reason, you should ensure their safekeeping at all times. Consider storing copies of share certificates at your registered office or SAIL address with your company’s statutory records and registers.

Rapid Formations provides digital copies of share certificates as part of the company formation process. A PDF version of each one will be sent to you on the day of incorporation, so you can save them to your computer and print them at any time, or store them in the cloud.

How does a company deal with lost share certificates?

Digital copies of a share certificate can be lost if the shareholder loses access to their computer or cloud storage (e.g., as a result of a lost password).

Meanwhile, physical copies can be misplaced, thrown away by accident, or damaged in a fire. If a share certificate is lost or damaged, it will be necessary to issue a replacement.

The general procedure for dealing with requests to replace lost share certificates is as follows:

See also: One person to form a limited company

In certain cases, the company may request that a third party, such as a bank or insurance company, provides a guarantee in respect of the indemnity. In effect, the third party will countersign the indemnity provided by the shareholder, and they will be ultimately responsible for ensuring that any losses sustained as a result of the replacement certificate being issued are recovered.

Is a new share certificate required for a change of name or address?

If a shareholder just changes their address, there is no requirement to issue a replacement share certificate.

Do I need to provide copies of share certificates to Companies House?

Cutting through the company formation jargon
May 7, 2022